rewards and merit money for the whole 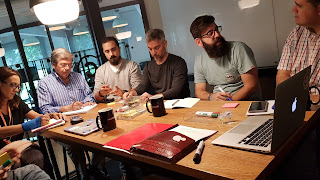 When I talk in my courses about rewards, I always like to recall a support request I received from a Spanish customer. This software company was facing considerable problems regarding the size of the user stories. After some consultancy with the teams affected, what came out was shocking: in order to increase the performance of the Scrum teams, the company’s management had attached a bonus to each sprint goal.

The effect on the teams was terrible, as the Scrum teams focused on getting the reward, and not on meeting the sprint goal! Because of this bonus system,  at sprint planning only small, cristal-clear user stories with detailed requirements were accepted by the Scrum teams…

A lot has been written on extrinsic and intrinsic motivation. But at some point we all realized, that the subject is far too complex, so that there is no easy rule of thumb you can apply in your company to nurture intrinsic motivation: surely knowledge workers like money as anybody else!
However, what really stroke me by reading ‘Drive’ from D. Pink , is the fact that intrinsic motivation is ‘new’. It was 1949 at the University of Wisconsin, when Harlow and Deci, testing the behaviour of monkeys, mentioned for the first time what amounted to be the third drive (D. Pink, ‘Drive’). That is, over thousands of years, the human mankind was not aware that intrinsic motivation even exists!
When it comes to monetary rewards or bonuses, it is crucial to making sure that the subject ‘money’ is out of the table, so that people can concentrate on doing a great job. I normally recommend the companies I work with to pay their employees their market value: this way, money is not an issue anymore.

Jürgen Appelo defined 6 excellent rules for rewards, and, even if I take stock in all of them, especially the last one, Reward peers, not subordinates, gives a very different perspective to this subject.


One example, for the ones who don’t know it yet, it is worth to take a close look to the tool Bonusly: applying the concepts of ‘merit money’ you can distribute some self-defined currency units among your peers, with a short description why. Each and every company has the possibility to define how those units are converted into real money, all within a transparent process! Apple, Amazon, Nike.. are some of the enterprises were Bonusly is being successfully applies.
I have applied this dynamic every time I have been able to apply it with managers or direct managers (rrhh, etc.) who have a decision on the rewards in the company.

I list the 6 rewards rules in 6 post-its:
1. Do not promise rewards in advance.
2. Keep the early rewards small.
3. Reward continuously, not just once.
4. Reward publicly, not privately.
5. Reward the behaviors, not just the results.
6. Reward your peers, not just your subordinates.

Then, I allow the participants to position themselves in each of the 6 rules, indicating if they have made that reward by writing a publication with each practical example of the reward.

I ask what has been the impact of this reward.

Later, with another post-it color, I ask for the "anti-reward" of that reward that has actually been made.

Example:
1.- Do not promise rewards in advance.
Anti-reward: I have promised a reward in advance on a project if it ends on the date of amount Z.

A small debate is generated about the implications, conclusions, learning and impact of this situation.

It is about challenging to have rewards for group, team merits, not to incentivize with bonuses for individual goals. Try to group practices that reward the group, the team, not the individual above the group.
LEARNING:

The learning is based on the grouping of the rules with the participants, the disparity of cases, there are cases in which the way of granting the rewards (without being the 6 rules) has worked for them and, as they are learned, they take new possibilities of rewards. experience and contemplate a future, an improvement or evolution.

There are other cases in which they realize that they have not worked as expected, which opens the search range of why it has not worked.

Finally, in other cases, they see the 6 rules of rewards as a new way of applying and experimenting to see their influence and impact.

The main learning for them is how to move towards a group incentive, breaking with the individual incentive. If not only rrhh, c level members participate in the dynamics, also people from the teams usually serve to provide feedback at high levels with possible group freezing techniques, to align the organization towards a new way of incentivizing its employees thinking as a whole and not as an individual.

It can go well:
I always try to "challenge" the minds finally with the learning obtained from the dynamics, enumerate at least one action in one of the rules that they can commit to perform or experience, for months after trying to redo the dynamics with them focusing on learning practice or receive comments at least on how was your experiment with the practice. The feedbak is usually very positive, but there are some cases in which it does not work as expected initially due to lack of sponsorship, commitment, execution time, and in that case "that same" is the learning that allows a new conversation in Your company to improve.

I try to challenge the marked individual incentives, so that they generate the same or similar group incentive and measure or make a possible prediction of what their impact would be. And that they realize it and we meet again with the feedback obtained as a continuous learning.

It can go wrong:
If the people involved do not have sponsorship or empowerment in the organization, we must limit expectations to help at the top to identify future improvement actions, without raising hopes.
These people are not drivers of incentives or rewards and can fall into resignation or take advantage of the dynamics.

My opinion:
My personal advice for any company that seeks to obtain the best of its skilled workers is to avoid monetary rewards by integrating the annual bonus into the regular salary. Focus the group reward, breaking with the individual reward standards. After that, make sure that your employees' salary matches their market value, so that money is no longer a problem.

My conclusion:
It is very important to manage the initial expectations of the dynamics so as not to have problems and, above all, to show these expectations to everyone, thinking about how to improve the whole, not to individuals individually.

Primitivo Cachero Viejo
He has been in software development for over 25 years and the last 10 years in Lean and Agile transformations. The purpose is with consulting & coaching, to help change the way we understand business, people & leadership, with a new more human leadership beyond resilience, agility and antifragility to give a flow of value to society (real customers).